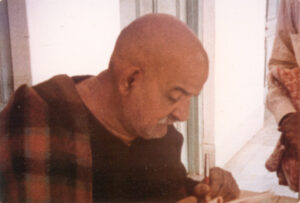 One day a rich man who speculated in gold on the stock market was present in Baba's durbar.

Baba introduced gold as a topic of conversation and said, "The price of gold will go down in future."

The rich man said, " No Baba, there is no such possibility."

Baba gave certain reasons and said, "Its price will certainly go down."

The man got the point and sold all his gold at a marginal profit. Later the price did go down and the man escaped a great loss.

When he came to meet Baba the next time, he offered him two thousand rupees as a way of showing his gratitude.

Despite all his entreaties, Baba did not accept the money.

After he left, a devotee told Baba that the money could have been utilised for the ashram and temple.

He wanted to know why Baba had rejected the offer.

Baba said, "He wanted to buy me with that money."