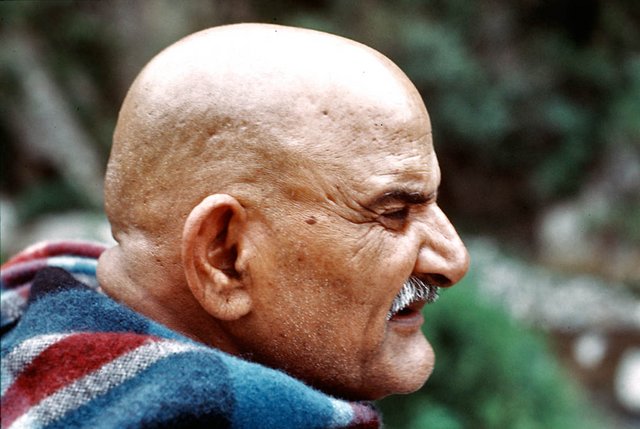 Another clue came from Sri S. N. Sang. the principal of Birla College at Nainital and a great devotee of Babaji.

He was very dear to us, and we sought his company whenever he was in Kainchi or Allahabad.

Once he came to Allahabad and spent four days with us.

He narrated his first experience as a little school boy reading in a public school in the Punjab.

"The students used to have a camp for a few weeks in the mountains every year. We were in our camp in the Simla hills, collecting some flowers or running after butterflies, when we saw a man in a blanket passing by. We took no notice of him as there were so many persons coming and going, After a few minutes, a cowherd from a village in that area came running down shouting, 'Such a great saint has passed by and you did not run after him!'"The question that we hurled at him was why he himself had not followed the saint. He said he had gone to call Santia (his wife) and other people in the village. When the people started going up the hill, we joined them. After quite some distance, we all came back as there was no sign of the man in the blanket."The cowherd began to talk of his boyhood days, when he had known that man in the blanket as Talaya Baba (the baba who lives in a lake). The cowherd said that he and the other village boys used to bring their cows and goats for grazing. They used to carry their food with them for the noon, as they would not return before the evening. After reaching a nearby lake, they would tie their food in a cloth and hang it on the branches of a tree.A baba used to live in that lake (talao) and was known by the name of Talaya Baba. Whenever they came there, they would see him in the water. He was very kind, and everyone used to talk highly of him as a sadhu but he used to tease them a great deal. When they came for their meal at noon, they would see that he had taken away their bag from the tree and had distributed the whole of it to the people coming to him, or to the animals. Then he would feed them in plenty with all kinds of delicious food - pure halwa, laddoo, khir- they would never have imagined tasting so many sweets together. He would get the food by putting his hand on his head or from the lake in which he was sitting. He loved them much and used to talk to them when they were near him."This was long ago. They were just small boys then, but he remembered everything about Talaya Baba. One day when they came with their cattle, he was not there in the lake. They searched for him on every side but could not find him anymore. A very long time had passed since they had seen him, but he recognized him as he was going by this road."Sang continued, I was caught in a dilemma. The villager was emphatic that they had actually seen him (Maharaj-ji) living in the lake, but we did not believe him then. How could one live in the water? But I confess, at this late age, after seeing him with my own eyes and spending a part of my life in his presence, with no doubt to distract me from my faith, I believe he is the Talaya Baba who lived in the lake."These are just a few chunks picked up of the broken vase. Strictly speaking, they are not useful or necessary at all for the devotees who had seen him or heard of him. We may collect all the chunks of the broken vase, but that would not make it a new one or be of any use to anyone.