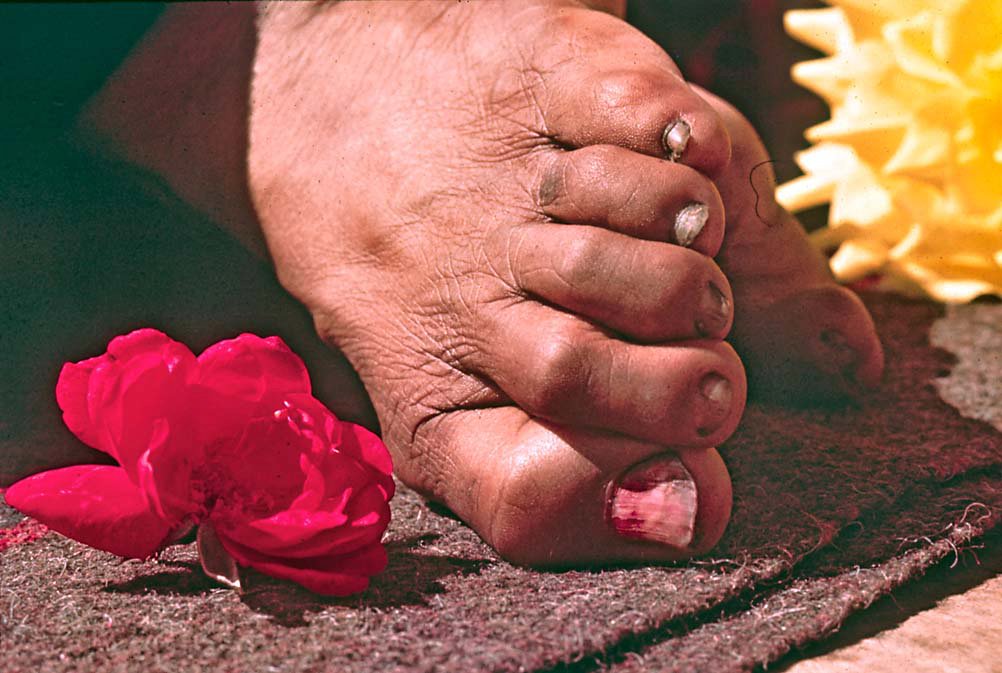 The late Mrs. Uma Shungloo was a very religious, simple and pious, polite, self-respecting old Kashmiri Brahmin lady. She was dutiful, scrupulously clean and without any modern-day evils.

Once she fell seriously ill and during her week's treatment I had to go to her house almost daily to watch the progress. Even after she became completely free from symptoms, my visits to her house increased on account of her motherly love and affection towards me.

The demarcations between doctor and patient vanished and a son and mother relationship got fully established.

>I had seen Mrs. Shungloo performing puja, putting flowers on the feet of Maharaj Neem Karoli Baba's picture, doing arti and bestowing prasad. She was a great devotee of Babaji, narrating to me stories about his miracles.

At one point, she extracted my 'gentleman's word' that I would accompany her to 4 Church Lane in Allahabad where Babaji used to pass his winter days.

The house looked deserted. I was slightly dismayed and perturbed at the fast approach of Gora, Dada's pet dog, but with Ma's assurance we dared to enter the house. Mr. Sudhir Mukerjee, my mother's 'Dada,' greeted us and welcomed us with folded hands. Mother touched his feet and took me to an adjoining fragrant room where I saw a plank covered with a nice plain bed sheet and a picture of Baba's feet surrounded by a beautiful floral arrangement. I saw Ram Ram written [in Devanagiri script], not by any paint or ink, but by buds of white jasmine creeper.

While my mother got busy putting flowers and showing incense sticks to Maharajji, I got absorbed in Maharajji's pictures hanging on the walls of this room. After her puja, she took me inside and introduced me to Dada and Didi (Mrs. Kamala Mukerjee, Dada's wife). When I encountered Dada, for reasons not known to me, all the pictures which I had witnessed in Baba's room became visible in Dada's face. Dada's face and Baba's face looked alike to me. There was a spontaneous reflex in my subconscious mind that Baba had appeared before me in Dada's embodiment. Ma had told me that Baba had left this work, but I was visualising Shri Maharajji in the body just in front of me.

Many thoughts started hovering in my mind which I wanted to narrate to mother, but she wanted me to take prasad in the near verandah in front of the courtyard, which is almost a fixed place for Dada. After tea and prasad was served, we came back and I dropped Ma at her residence.

It was repeatedly coming in my mind that I had had the darshan of Baba. I went to Dada's place twice or thrice on different dates. Whenever I visited, I noticed that Dada's subject of incessant talk is only about Maharajji's life and nothing else. I noticed his complete surrender and dedication towards his guru.

All the personalities of the world who have acquired fame and greatness can broadly be categorized into two classes: people in the first category look very great from a distance, but if you approach closer, you find they are surrounded by many evils and worldly lures. In my opinion, they are the smallest and worst type of people, having created a false halo around themselves. But the people of the second category look very small and unassuming from the distance. If you study them by coming nearer, you find that they are very humble, polite, and devoid of any worldly evils, but are full of godly qualities. I would call Dada one of the great ones because of his great devotion, dedication and compassion.

Dada has reached the terminal phase of Bhakti yoga. I can say with confindence that he has acquired all the powers by his undaunted devotion and dedication towards his guru, Neem Karoli Maharaj. Dada is always in trance and absorbed into his Babaji. He is fully and completely in his dhyana while performing his routine duties—walking, sitting, eating, sleeping, talking. He has developed these qualities due to his uncompromising and non-shakable faith in his deity.

Shri Neem Karoli Baba is no more with us, but by hearing remembrances of Baba as narrated by Dada, Baba's life becomes visible before our eyes. Whenever Dada starts telling the stories about Baba's life in bodily form, it becomes crystal clear; you feel that his whole life is being televised. Another such lively commentary of Baba's life you cannot get easily. Taking this into consideration, Baba's devotees in India and abroad have given great emphasis to getting down some things from our Dada in black and white.

When Mr. Ram Dass and Mr. Jai Lakshman visited Baba's place last, they requested me to get all relevant information regarding their guru and stories of Maharajji recorded in cassettes. My efforts were ongoing, but it seems that Maharajji motivated Dada to pen down some things and to my surprise I found that my work was done. After Baba's inspiration, Goddess Saraswati also came down. This holy confluence has made it possible for us to learn about Baba's life and the life of some of his great devotees.

When the great Vyas was toiling with the idea of writing down the Mahabharata, he required an expert steno, and Shri Ganesh presented himself to render his service for this pious work. Ganesh was so great an expert that he could pen down everything even before the ideas came in Vyasa's mind.

During the period when Dada was busy in his work of writing the stories of Baba, his pen did not encounter any full stop. He was absorbed to such an extent that he almost forgot his routing obligations. Occasionally Didi would put tea or lunch on his table, but it would not draw Dada's attention. Lunch and dinner times were disturbed. Didi was quite anxious and used to tell us about it.

My only job left was to continuously supply him with dozens of notebooks and ball point pens so that there might not be any hindrance due to the shortage of these materials. After the manuscript was complete, the typist did not dare to undertake the work. I had to take the challenge and personally sat several hours each day and in the night with the typist for this work to be completed.

Although Dada's manuscript is primarily in English, specially meant for devotees of Maharajji residing outside of India, a decision was taken by a very senior and great devotee of Maharajji, Shri Sarvadaman Singh Raghuvansi, to bring out the book in Hindi also. My elder brother, Shri Radheshyam Gupta, who is expert in this work, by his hard labor completed this translation within a very short time.

There is an old saying that a touchstone can convert iron into gold. Undoubtedly, our saints and sages, with their tender touch of earthen materials like human beings, can bring about marvelous changes. Innumerable people who came in close association with Maharajji got changed and transformed completely. This book is the collection of a few selected flowers from the garland of many devotees who were rejuvenated completely. The book not only throws light on the phenomenon involved in this complete change of life, but also gives glimpses of the inner lives of these saints and sages of India.

I trust and believe that this book, which is in your hand now, will lead all devotees to follow the path shown by our Maharajji and get moksha, becoming torch bearers to the whole of mankind in their search for godliness.