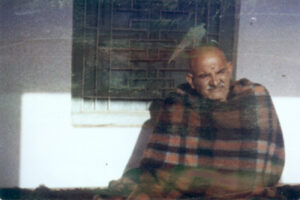 In 1968 Rajinder Anand came to Kainchi with her mother for Baba's darshan.

As soon as Baba saw her, he said to her mother, "Get the marriage of your daughter arranged." He gave Rajinder two rupees and sent them away.

They came out of the ashram, got on a bus for Haldwani, and sat down. When the conductor came to give them tickets, they found that they were two rupees short of the fare. They paid with the money that Baba had given to Rajinder.

While they had accepted the money from Baba very reluctantly, they came to understand that his purpose in giving it was to save them from that embarrasing situation.

At home the family began to make arrangements for Rajinder's marriage, which took place the following year. After her marriage Rajinder and her husband went to kainchi for Baba's darshan. Baba held up three fingers and said to her, "Three sons will be born." Indeed she gave birth to three sons - all boys.