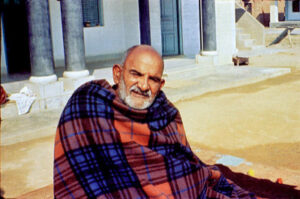 In 1971, my wife's health deteriorated gradually until one day her condition became serious. I was worried about her and went to the ashram to tell Baba of my concern. The sun was setting, and Maharaj was sitting alone in his kuti, facing the window. I bowed to him from outside the window, went into his room, and sat facing his back on the floor by his takhat.

Some moments passed in silence. Then Baba suddenly turned around and showing two raised fingers, said, "Two more children are yet to be born."

He then became serious and sat quietly facing the window.

Then I began to think that my wife was aging and that if she was going to give birth to more babies, she would not be able to withstand the physical strain.

I then thought that the birth of a child was a matter for joy and wondered why Baba became serious and quiet. I did not have any answer to this question and it remained a mystery. Gradually my wife recovered.

In Sept 1973 Maharaj took Mahasamadhi, and in the winter of that year, my wife gave birth to twins. Both children had a beautiful appearance, but they were still born. It was then that I understood the meaning of Baba's silence.