LilasMiracle Of LoveWhen I First Came to India 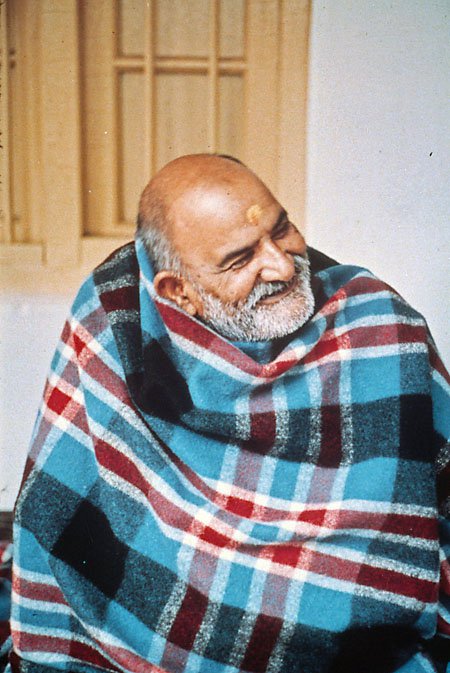 "In 1967 when I first came to India, I brought with me a supply of LSD, hoping to find someone who might understand more about these substances than we did in the West.

When I had met Maharajji (Neem Karoli Baba), after some days the thought had crossed my mind that he would be a perfect person to ask.

The next day after having that thought, I was called to him and he asked me immediately, "Do you have a question?"

Of course, being before him was such a powerful experience that I had completely forgotten the question I had had in my mind the night before.

So I looked stupid and said, "No, Maharajji, I have no question."He appeared irritated and said, "Where is the medicine?"

I was confused but Bhagavan Dass suggested, " Maybe he means the LSD." I asked and Maharajji nodded. The bottle of LSD was in the car and I was sent to fetch it.When I returned I emptied the vial of pills into my hand. In addition to the LSD there were a number of other pills for this and that--diarrhea, fever, a sleeping pill, and so forth. He asked about each of these.

He asked if they gave powers. I didn't understand at the time and thought that by "powers" perhaps he meant physical strength. I said, "No." Later, of course, I came to understand that the word he had used, "siddhis," means psychic powers. Then he held out his hand for the LSD. I put one pill on his palm. Each of these pills was about three hundred micrograms of very pure LSD--a solid dose for an adult. He beckoned for more, so I put a second pill in his hand--six hundred micrograms. Again he beckoned and I added yet another, making the total dosage nine hundred micrograms--certainly not a dose for beginners. Then he threw all the pills into his mouth. My reaction was one of shock mixed with fascination of a social scientist eager to see what would happen.

He allowed me to stay for an hour-- and nothing happened. Nothing whatsoever.He just laughed at me.The whole thing had happened very fast and unexpectedly. When I returned to the United States in 1968 I told many people about this acid feat. But there had remained in me a gnawing doubt that perhaps he had been putting me on and had thrown the pills over his shoulder or palmed them, because I hadn't actually seen them go into his mouth.Three years later, when I was back in India, he asked me one day, "Did you give me medicine when you were in India last time?""Yes.""Did I take it?" he asked. ( Ah, there was my doubt made manifest!)"I think you did.""What happened?"Nothing.""Oh! Jao!" and he sent me off for the evening.The next morning I was called over to the porch in front of his room, where he sat in the mornings on a tucket. He asked, "Have you got any more of that medicine?"It just so happened that I was carrying a small supply of LSD for "just in case," and this was obviously it. "Yes.""Get it," he said.So I did. In the bottle were five pills of three hundredmicrograms each. One of the pills was broken. I placed them on my palm and held them out to him. He took the four unbroken pills. Then, one by one, very obviously and very deliberately, he placed each one in his mouth and swallowed it-- another unspoken thought of mine now answered.As soon as he had swallowed the last one, he asked, "Can I take water?""Yes.""Hot or cold?""It doesn't matter."He started yelling for water and drank a cup when it was brought.Then he asked," How long will it take to act?""Anywhere from twenty minutes to an hour."He called for an older man, a long -time devotee who had a watch, and Maharajji held the man's wrist, often pulling it up to him to peer at the watch.Then he asked," Will it make me crazy?"That seemed so bizarre to me that I could only go along with what seemed to be a gag.So I said, "Probably."And then we waited. After some time he pulled the blanket over his face, and when he came out after a moment his eyes were rolling and his mouth was ajar and he looked totally mad. I got upset. What was happening? Had I misjudged his powers? After all, he was an old man (though how old I had no idea), and I had let him take twelve hundred micrograms. Maybe last time he had thrown them away and then he read my mind and was trying to prove to me he could do it, not realizing how strong the "medicine" really was. Guilt and anxiety poured through me. But when I looked at him again he was perfectly normal and looking at the watch.At the end of an hour it was obvious nothing had happened. His reactions had been a total put-on. And then he asked, "Have you got anything stronger?" I didn't. Then he said, "These medicines were used in Kulu Valley long ago. But yogis have lost that knowledge. They were used with fasting. Nobody knows now. To take them with no effect, your mind must be firmly fixed on God. Others would be afraid to take. Many saints would not take this." And he left it at that.When I asked him if I should take LSD again, he said, "It should not be taken in a hot climate. If you are in a place that is cool and peaceful, and you are alone and your mind is turned toward God, then you may take the yogi medicine."by Ram Dass Buy Miracle of love: Stories about Neem Karoli Baba