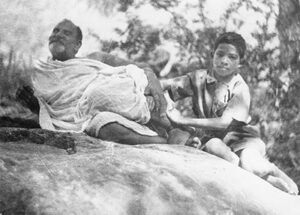 There is a story told by a Westerner that is not in any of the books about Maharajji. It tells of a day when there were lots of young Westerners in the ashram. Maharajji called from His tucket to have everyone bring ALL the hashish they had to Him. They dared not hold back or hide any of it because Maharajji knows everything. They brought a huge amount – several softball size balls, thumb size, little finger size, little strands like spaghetti, as well as patties, etc. Wow, kids will be kids.

Maharajji then redistributed these saying to some people “do not smoke” anymore. To some people He said, you should try smoking a little of this. He gave the softball size pieces to some old chillum baba sadhus there. He was like a doctor dispensing herbal medicines.

The following is [one] Indian’s perspective on the ancient use of Marijuana as a sacrament: “[It is] because of its association with the religious life of the country that bhang is so extolled and glorified. The stupefaction produced by the plant’s resin is greatly valued by the fakirs and ascetics, the holy men of India, because they believe that communication with their deities is greatly facilitated during intoxication with bhang. (According to one legend, the Buddha subsisted on a daily ration of one cannabis seed, and nothing else, during his six years of asceticism.) Taken early in the morning, the drug is believed to cleanse the body of sin. Like the communion of Christianity, the devotee who partakes of bhang partakes of the god Siva.”