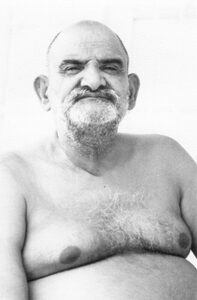 One day Maharajji asked me what I did in America. He meant specifically how I earned my money. I told him that my present monies came from the sale of hashish in Canada. I said that I sent it to friends there, concealed in the covers of Ramayanas and Gitas. Thereafter my presence was demanded from time to time, usually when very important devotees were having his darshan, such as senior government officials.

When he first heard about the Ramayana scam, he seemed momentarily shocked. After all, I reasoned, this was both a crime and perhaps also a sin; minimum it was disrespectful to the Hindu holy books. But moments later he seemed somewhat delighted. Thus the routine between us was perfected. Like a trained monkey I would approach his tucket when summoned, and do pranam. Usually he was surrounded by well-dressed English speaking devotees. They would translate to me from his Hindi. 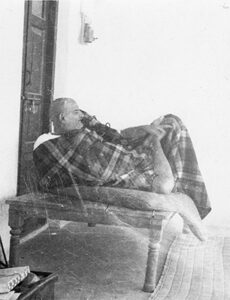 Someone recently asked what it was like to be around him. As a child, all I remember is that it was great fun.

As I replay those meetings in my mind, I feel differently today – here was a man who did not look like any saint that I had met – his language was often colorful; he did not have the same hang ups as most other sadhus that I had come across – most have severe restrictions about where they will eat, who will cook it, etc..

His devotees did not fit into any pattern either – they were rich, they were poor; they were Hindus, Muslims, Christians, Jews, Sikhs, and even the atheists who did not realize that they had been drawn.

There were the VIP’s and the dacoits, all in the same room.

He preached nothing and yet his devotees were constantly learning. 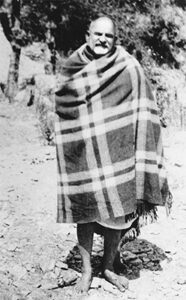 Maharajji was a continuous source of laughter for his devotees. He kept those Indian devotees with whom he was most intimate always in a state of mirth. Humor was a central feature of Maharajji’s teaching style. Yet from time to time he manifested a much fiercer form.

These were often myth-shattering darshans. From the longtime Indian devotees we learned one set of myths developed by them over the years. Personal experiences, other people’s stories and myths all blurred together.

We Westerners developed another set of myths, often based on our own pre- and misconceptions of who Guru was and how he behaved.

During the months of January and February the annual Magh Mela is celebrated at Prayag Raj , i.e. Allahabad, and this even attracted a number of foreignmers who had taken to sadhu life. Since the circle of foreign seekers was always few in numbers and close knit, inevitably a few of these sadhu types visited Maharajji's camp on Church Lane.

A few of these men had taken to wearing the complete sadhu uniform, complete with sectarian marks applied to the forehead with colored paste. This indicated the lineage of their gurus, and differentiated them from all of the dozens other sadhu sects.

Maharajji, of course, was familiar with these "sign-boards" and he drew  our attention to them by asking these people why they were wearing them. Their answers were not as memorable as Baba-ji’s comments to us that these signs or any external sign of one’s spiritual life were unnecessary.

First of all they indicated a separation between the wearer of a particular sign from those wearing other signs or none at all. Secondly Maharajji repeated what he had told us many times in the past, which was his message of the unity of all religions and the oneness of God. He had told us before that Hanuman and Jesus were the same. He seemed to be clear that there was no need for us to align ourselves with any particular sect or limit ourselves by claiming to follow one path. 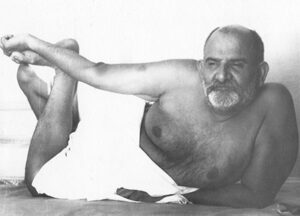 One devotee was only one year old when his older brother died. His mother, deeply upset, took her son on a long pilgrimage.

In Jagannath Puri, she laid her small boy at the feet of the murti of Lord Jagannath and offered him to the Lord.

Years passed and she never told her husband or her son about this incident.

More than fifty years later, her son, who'd become a devotee of Maharajji, was driving his car to work, repeating the name Ram to himself while driving. Suddenly a truck sped  across the intersection and collided with his car, turning it over on its roof.

Some bystanders pulled him out of the car. He was completely unhurt, but when he saw the extent of the damage to the car, he went into minor shock. The doctors could find no physical injury.

That evening, Maharajji telephoned him from Sitapur, saying "You had an accident, but received no injury."

A few days later, Maharajji came to his home. In front of the devotee's mother Maharajji said, "You had an accident. What were you doing at the time? You were saying 'Ram Ram, Ram'!"

His mother said, "Maharajji, it's all your grace, all your blessing."