LilasIt All Abides in LoveMaharajji Causes Devotees to Meet in Delhi 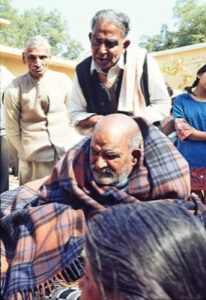 In January 2001, I had been staying in Vrindavan for some weeks and traveling daily to Maharajji’s birthplace, Akbarpur, bringing along the pandit for the ceremonies and an 18 year old woman from Taos named Parvati (Jillian). I had been shooting the function for a video that was later posted online. We were the only Westerners there among about fifty thousand Indians yet we felt profound bliss amidst the throng. The following week, Parvati needed to go to Delhi but was unfamiliar with that city, so I brought her there to make some arrangements for traveling back to America some weeks later.

Parvati had been in India for many months. As a reminder that the West even existed, I took her to the Western style restaurant named Nirula’s that was on the outer circle of Connaught Place near the Palace Heights hotel, a place once used extensively by Maharajji’s satsang.

After we had finished and were walking down the stairs of the restaurant, I got an overpowering urge to go walking before getting back in the car. We headed toward the inner circle and I went off, a little to the side, to tell my driver, Rup Singh, that we were going to walk, while Parvati went ahead.

As I was catching up with Parvati, I noticed her ahead in the crowd hopping up and down with joy. As I caught up with her, I saw my very dear friend Krishna (Connie) sitting there paying her fee for an auto rickshaw. She said that she had been at Maharajji’s ashram in South India and had just then arrived from the train station. She said that she had taken her bags to Palace Heights and had returned for only 1-2 minutes to pay the auto rickshaw driver.

I asked, “Are you going to the Maha Kumbh Mela?” She said, “Oh, I don’t know. I was thinking about it, but it is not clear.” I said, “Well, we are going back to Vrindavan in two days, then driving to Allahabad to attend. You must come with us.” Parvati and I went to Krishna’s room at the hotel and spent some quality time with her until evening talking and hanging out.

The next day we did errands in Delhi and the following day we all drove to Vrindavan where we spent one night, then drove to Gurudat Sharma’s house in Kanpur where we spent the night. The following morning we drove in my car to Allahabad accompanied by Gurudatji and his wife also named Krishna.

We arrived at Lal Makan (red house) the house Maharajji built on Church Lane where Dada and Didi resided for so many years. Several young women from Taos were there at the house preparing to go to Maharajji’s camp at the Kumbh Mela. We spent several wonderful days there before I had to go back to Vrindavan with my car.

Everything changed when we met Krishna on the sidewalk in Delhi. It was much easier for all of us when we were together and Krishna’s knowledge of India and her help in making arrangements turned out to be a total boon from Maharajji. All three of us to this day fondly remember this special time because of Maharajji’s impeccable timing in New Delhi.

Many devotees talk about the timing and synchronicity in these sorts of rather simple circumstances. It is fun having some chai and listening to Maharajji’s devotees speak about impossible meetings, with perfect timing.