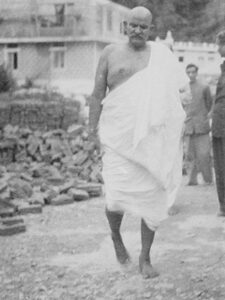 I first met Maharajji in about 1930, when I was a schoolboy. Father was a great devotee. Maharajji visited our family in Faizabad (near Ayodhya). After my father’s retirement, I became superintendent of police of jails. Maharajji would come visit wherever I happened to be posted—Agra, Bareilly, Kanpur, Lucknow, and so on.

One room in our home was always kept vacant for Maharajji. From the 1930s on, I detected no drastic change in Maharajji’s appearance. We prepared his favorite foods daily—loki (squash) vegetable, mung dal— in case he should come. When Maharajji didn't come, we would take it as his prasad.

For more than twenty five years Maharajji visited our home in Lucknow. He came at least once a year, for a few hours or a few weeks. He was both guru and grandfather to everyone in our family. All the children were born and raised under his guidance. He referred to them as his own children, and they in turn were very free with him. 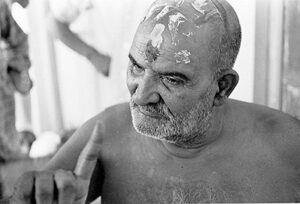 At Kainchi he had this simple little room, which we used to call his 'office'. There was a window with shutters on the inside that he could open, where he'd often sit, looking out and giving darshan.

Sometimes he would jump around in that room like a monkey in a cage or press his face to the bars. At other times someone would come to the window to see him and he'd just slam the shutters closed.

Once he said, "Oh, its very nice and peaceful here in Kainchi. When you come here, you can really get peace. Shanti milta hai (Peace is found)."

Then a few weeks later some truck went by on the road and he said, "Oh, this kainchi, so noisy- no peace here, ashanti."  He'd gone from shanti to ashanti (not peaceful) in the same place. 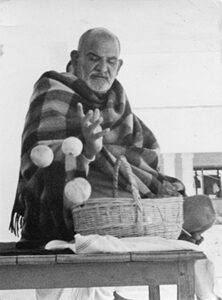 I once found myself becoming very angry while at Maharajji's temple. Most of the anger was directed against my fellow westerner devotees. Although there were perhaps some justifiable reasons for the anger, the fever pitch to which it had risen at the end of the two weeks was surprising, even to me. It was at that point that I walked to the temple and arrived late.

All the westerners were sitting in the usual row on the porch, on the opposite side of the ashram courtyard where Maharajji was sitting. From here they could watch him from a distance while they were taking prasad (lunch in this case). When I arrived and sat down, one of the Westerners brought over a leaf plate of food that had been saved for me. And at that moment the fury broke and I took the leaf plate and threw it. From across the courtyard, Maharajji watched.

Almost immediately I was summoned to his presence, and I crossed the yard and knelt before him. "Something troubling you?" he asked. "Yes," I said looking over at all the Westerners. "I can't stand adharma (those behaviours which people manifest that take them away from God). I can't stand it in them (pointing to the westerners), and I can't stand it in me. In fact I can't stand anybody at all except you." 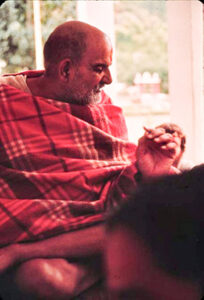 Maharajji reacted in a variety of ways to those of us plagued by anger; and all of those ways sooner or later brought the anger to the surface and helped us begin to let go of it.

Sometimes a devotee would become the object of a continuous barrage of abuse from Maharajji. The abuse, coupled with the underlying love, was a great panacea for even the most hidden and deep-seated anger.

For others it seemed as if situations just developed around Maharajji that forced anger to the surface like a badly inflamed boil. And at just the right moment, Maharajji would be there with the necessary word or glance to release the anger - and the necessary cup of milk to soothe the soul after surgery.

My wife had met Maharajji and had come to get me in America and bring me back to meet him. When we first went to see Maharajji I was put off by what I saw. All these crazy Westerners wearing white clothes and hanging around this fat old man in a blanket! More than anything else I hated seeing Westerners touch his feet.

On my first day there he totally ignored me. But after the second, third, fourth, fifth, sixth, and seventh day, during which he also ignored me, I began to grow very upset. I felt no love for him; in fact, I felt nothing. I decided that my wife had been captured by some crazy cult. By the end of the week I was ready to leave.

We were staying at the hotel up in Nainital, and on the eighth day I told  my wife that I wasn't feeling well. I spent the day walking around the lake thinking that if my wife was so involved in something that was clearly not for me, it must mean that our marriage was at an end. I looked at the flowers, the mountains, and the reflections in the lake, but nothing could dispel my depression. And then I did something that I had really never done in my adult life. I prayed.