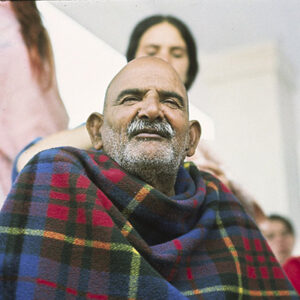 Maharajji was here to help the downtrodden.

“Once Babaji went to Hanuman temple, Lucknow by Kehar Singh's car. Umadatta Shukla also was with them. Babaji went into the temple and facing Hanumanji sat by the fence on the road-side.

The driver also desired to have Hanumanji's darshan. Therefore, he locked the car and went into the temple by the bridge at the side of the road. When Shuklaji saw him he came running and met him half-way on the bridge and jostled him out.

The Supreme Being' Babaji, though He had His back towards them saw all this. He came running and set the driver free with such force that Umadatta could not bear the push and fell on one side.

Admonishing Shuklaji He asked, ‘Who are you to stop him? Do you think I have built this temple for you? It has been built for them (low castes, poor, miserable and afflicted).’ Saying so He took that Koiri (a low caste), holding him by the hand, to Hanumanji and bending His head made him to pranaam Hanumanji.

Kehar Singhji was an eye-witness to this incident.” (Endnote: from "Prem Avatar")

EVERYONE gets jaoed (sent away) at some point. And that's okay. Gurudatji told how “Maharajji jaoed many people. VIPs would come and get their ladhus (a sweet) and they would want to remain with Maharajji. But Maharajji would snap His fingers and point for them to go. If they hesitated for even one second, He repeated the command in a stronger way. This happened even with VVVVIPs. Maharajji didn't care if you were rich or famous.”