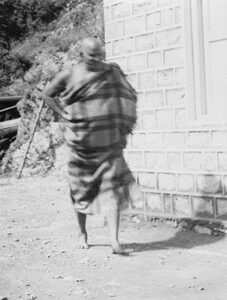 There are many anomalies surrounding Maharajji, not the least of which is the question of time. Timing is Everything. Synchronicity is a big element of the Lila of Maharajji.

Devotees of Maharajji often share these stories with each other. These often reveal how Maharajji uses timing. For example, when two of His devotees meet in such a way that what they both intended they both intended to do changes. These meetimgs can be when people will be at a particular spot within little tiny time windows of 1 or 2 minutes, and sometimes just 1-2 seconds.

Often Maharajji will make you late or cause you to be ahead of schedule. There are many stories of this in the daily lives of His devotees. These stories will rarely be written in books about Maharajji's Lilas because He had touched them each in their own very personal way.

Being on time is so strange. I've grown to rely on Maharajji to handle the time. I have a way different sense of how to deal with it than I did when I was younger. There are so many stories of Maharajji's perfect timing. I'm always trying to hear Maharajji about timing - like when I should make a shift, when is the best time to call? I am looking to get the "hit". Because of this, when I've done this correctly, I call someone and they say, "Wow. You called at the perfect time." Then there are the times when I've tried dozens of calls to a person over several days with no answer. This I attribute to Maharajji, as well - "Oh, Maharajji doesn't want me to talk to that person."

Then sometime later, I realize that it was good that I didn't plug in with that person for one reason or another.

The timing of Maharajji is mentioned in stories of Maharajji's Lilas. The man who wanted to leave the ashram to bring his fruit to market, only to be delayed by Maharajji, later discovers that if he had taken the fruit to market he would have lost money, but because Maharajji delayed him, he was able to make a profit at a different market.

The couple who were to take the train, but Maharajji delayed them, causing them to miss it, later discover that there was a train crash with many people killed in the particular train carriage where they would have ridden.

When they were bringing Maharajji to the train, for example, He made them rush so much and then they would arrive with a long time to wait at the station. Sometimes, Maharajji would suddenly take the rickshaws, on which they rode, off on some side street to give darshan to a man in his home. When the devotees said they would miss the train, maharajji told them the train would be delayed. Of course, the train was delayed, and of course, Maharajji's party reached the train station at the perfect time. Maharajji, also, seemed to be able to stand on the platform at the exact spot where the door to His compartment would line up.