LilasIt All Abides in Love (3)

It All Abides in Love"Perfect for any intermediate-advanced followers of Neem Karoli Baba. It puts a lot of the advanced teaching bluntly and for those who can understand it, that is amazing! I like that it does give it's own guidance on some of the teaching. A lot of book[s] are only stories and leave you to make your own conclusions. This book gives you conclusions that are beyond the material." 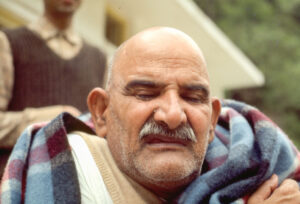 "Siddhis are spiritual, magical, supranatural powers acquired through sadhana(spiritual practices), such as meditation and yoga.

People who have attained this state are formally known as siddhas.

I think many of the devotees of Maharajji's satsang have developed secret siddhis. They will never admit to that, ever, for then these powers are lost. Nevertheless, the siddhis are there. 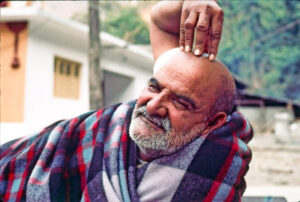 When Maharajji was here among us, devotees never knew where to find Him. They had to hunt for Him and follow leads like detectives. Maharajji was really hard to track down. Is He in Vrindavan, or Kainchi, or mathura, or a private home? Where is He ?

Maharajji said that by remembering Him, He would come to you. So, devotees would have magical meetings with him with unlikely synchronicity, unlikely timing. Even if they managed to get to places where Maharajji was certain to be, sometimes Maharajji actually made Himself invisible. Oh My God ! If Maharajji couldn't be seen, how could anyone even know that ? They could know that because Maharajji had people with Him who later reported that He also made them invisible. And actually beyond being invisible, they also could not be heard, although people who were right there could neither see nor hear them. Imagine being the person with Maharajji when Maharajji did that. Would your mind have any frame of reference to explain this ? It must have been much like being on LSD.

Even now we don't know where to find Him, but He is still here somewhere. Maharajji seems likely to have had several bodies in the times when Neem Karoli Baba was very much giving darshan to the satsang. Plus there is the added claim by some of Maharajji's devotees that He is a time traveler. 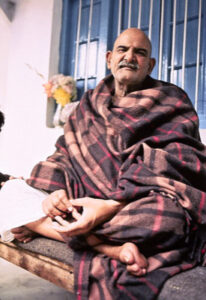 When I used to live in Maharajji's Vrindavan Ashram for long periods, I heard many stories not found in the books. Many are contained in this book. One story that seems to illustrate what was really happening constantly around Maharajji describes a day when Maharajji left in a car with four men. After some time(possibly several days?), they returned to the ashram. After Maharajji retired to his room, the men were hanging out together talking about the experience. They were shocked to discover that they had all gone to different places. How is that even slightly possible ? It seems that one could never be sure what was really happening when you were around Maharajji. However, this extended to other parts of one's life when you weren't even sitting directly in or near the physical presence of Maharajji. 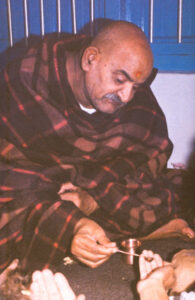 There are so many cases where devotees didn't listen to Maharajji, nor do what Maharajji told them to do. A prime example is the Lila of the water supply at Maharajji's Vrindavan Ashram.

From the very beginning of the ashram, there was a faithful spring that yielded abundant water. This spring provided so much water that the ashram wall had a small room with a window built in the front facing Parikrama Marg for dispensing water to pilgrims who were doing the propitious circumambulation of Vrindavan. 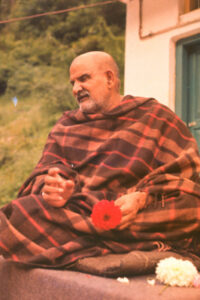 Maharajji in the form of Neem Karoli Baba could be described as a hobo or a tramp. He certainly was a divine renunciate.

The devotees of Maharajji in India believe that Maharajji is the direct manifestation of the Hindu God Hanuman.